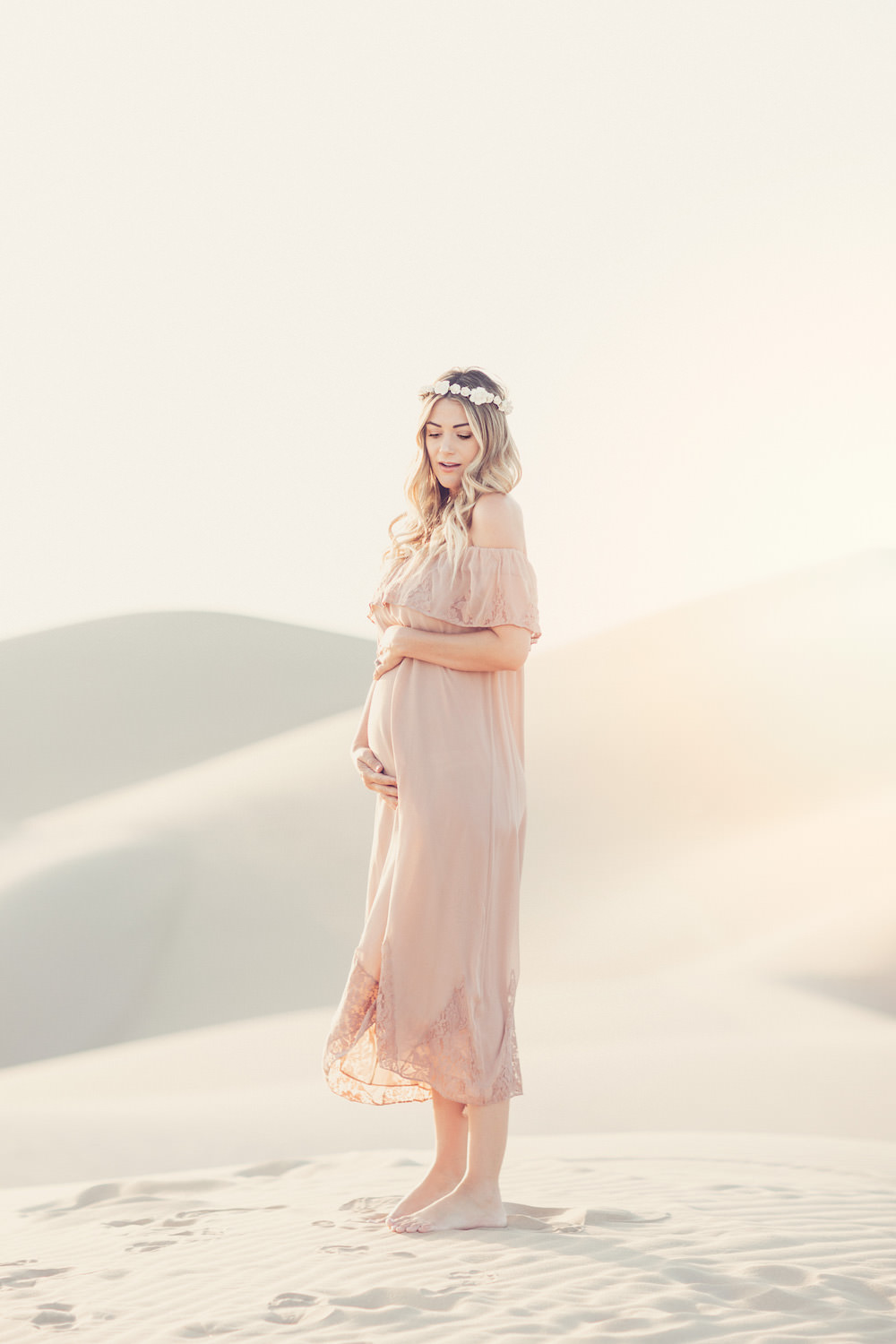 I've been holding a big secret you guys! HUGE! ASTRONOMICAL! And quite frankly I've been bursting at the seams to tell you for the last eighteen weeks (both figuratively and literally)! So I am so so so so sooooooo (AHH) hugely excited (and relieved) to finally shout from the rooftops that...

AHHHHHH! Like, is this for real?! We've been dreaming of this moment for oh-so-long (four years to be exact... but who's counting??!) It's been one heck of a long, winding rollercoaster of a road, filled with so many up's and (mostly) down's, to get here (you can read all about that here).

But, I can finally say with confidence and surety that, this is the one. THE ONE! I am still in shock and in disbelief, I think. But we honestly couldn't be more excited! I don't think it's even humanly possible. And I just keep telling myself, "you are growing the most beautiful miracle inside you right now. INSIDE YOU. Seriously, it is crazy."

And miracle it is. Why I waited so long to tell you

I've been dying holding this secret from you all. You guys are like family to me and all of your emails and messages checking in on me have made my day. And I know I have been holding off in responding to a lot of you because I knew I wouldn't be able to keep it a secret! But I knew that I needed to this time.

As you guys know, we've been through a bit of a heartbreak the last four years. From the monthly disappointment of "not pregnant" seemingly shouting at me from every pregnancy test - to four failed IUI attempts spread out through yet another depressing year - to the loss of both sets of our twins in two separate, back-to-back heartbreaking miscarriages - and disappointment after disappointment throughout the entire IVF process... it's been a tough, broken road for us, to say the least. And as I am sure you guys all know, I honestly didn't know if we would ever see the light at the end of the very dark tunnel that is IVF.

When we lost our first set of twins I thought to myself, "this must just be a fluke. Next time we will get our miracle baby." So when we got pregnant again, I thought for sure we had figured out the issue and how to stay pregnant thanks to a new IVF protocol. And when you share your IVF journey publicly, it's very hard to keep a successful implantation a secret. So we chose to share as soon as we got my blood tests results back. You guys have been in our corner from day one and we couldn't wait to share with you all. Ben came home from work early just so we could celebrate. But that too ended in tragedy for us.

So this time, I knew I needed to wait to share. Not only because I was afraid of once again going through another public miscarriage, but also because I didn't want to jinx this pregnancy. I know that sounds silly, but self-set mile marker after mile-marker would come and go and I still didn't feel confident that this pregnancy was the one.

At first I told myself I'd feel so much better once we heard the heartbeat. And holy cow we did. It's the best sound in the entire world. Yet, I was still unbelievably anxious and petrified at the same time for my weekly ultrasounds every Thursday to confirm it was still there (like, I couldn't sleep for weeks and even had a panic attack). But sure enough, the baby was still there doing twirls!

And then I thought I would feel better after we passed the nine-week mile-marker, where our two sets of twins had died. But nine weeks came and went, and I still didn't feel ready.

Then I told myself that after twelve-weeks, when your chances of miscarriage are said to lower significantly, I could feel more confident that this pregnancy was going to stick. But, on my twelve-week anniversary, I got a sharp pain (not the round ligament kind) that jolted me from a dead sleep. We were out in the middle of the ocean on a twelve-day cruise through Europe and I had to patiently wait to confirm everything was ok with our precious baby when we got back. It was utter torture you guys.

But finally, we got confirmation that everything was ok. When I heard that strong little fast heartbeat once again, I felt like I could breathe again. Ahhh, it truly is the sound of heaven, you guys.

When it finally felt really real

It wasn't until my 16-week ultrasound that it truly hit me. THIS IS THE ONE. OUR BABY ISN'T GOING ANYWHERE. AND WE WILL FINALLY REALIZE OUR DREAMS OF BEING PARENTS! IT'S REALLY REAL!

How far along I am

As of today, I am officially 18 weeks and 3 days pregnant with our precious little rainbow baby. The light after the storm. Our miracle. EEEEEEKKKK!!

How we got here

As you guys know, I had my latest frozen embryo transfer on February 16th, after a painful third (and hopefully last) egg retrieval in November. We (officially) found out I was pregnant via blood draw at my doctors office on February 27th. It was the longest, most torturous two week wait (2WW) of my life! I didn't even work at all for those two weeks because I honestly couldn't think of anything else.

But honestly, I cheated (I always do)! Normally I cheat with a pregnancy test the day before because I simply can't hold it in any longer. But this time, I cheated six days before. I bought the two-line pregnancy tests and used those for the first four days. Every day, that second pink line would get a little bit darker (ahhh). And on my last day before the blood draw, I used the "pregnant" / "not pregnant" test to confirm. And sure enough, I was leaping off the toilet as soon as I saw "pregnant!" And yes, I saved every single one of those pee sticks haha!

What My HCG Levels Were

My sweet nurse Shannon called me right away as soon as she had the results (she didn't even wait to have my IVF coordinator call me). What a sweetheart! And I am so glad she did! My HCG levels were at 197.5! Yup, I was officially pregnant!!!!! AHHHHHHHHHHH!!!! CUE THE HAPPY TEARS!!!

How many babies I am having this time

And on that note, I am excited to share that this time we are pregnant with just one perfectly healthy little baby!

To be honest I was excited to hear it was just one because in the past, although over the moon, I was also totally scared as hell about having twins. It's a difficult pregnancy on both the mother and babies, and I was also scared of something going wrong again, as it had in the past.

On the other hand, I was a little disappointed because we wouldn't be filling our home with those two little souls we'd lost time and time again. But I know that someday, we will have that second little soul here with us on earth.

How many embryos we put in

This time, we chose to put in one healthy, "normal" embryo that had been genetically tested (PGD) to confirm there were no chromosomal issues this time around. I actually really struggled with whether or not to put in one or two embryos.

On the one hand, if we'd put in two, our chances of conceiving would have been a lot higher.

However, our chances of twins would have been almost guaranteed - and our doctors split rate (embryos splitting and turning into identical twins) was already extremely high. Had that happened, we could have ended up with four or more babies! Holy crap! So at our doctor's recommendation, we chose to put in one embryo this time. It was extremely nerve wracking for me because in the past we had always put in THREE embryos (mind you, those had not been genetically tested via PGD). But by some miracle, IT WORKED!

How I have been feeling

Speaking of miracles, I have not been sick at all this pregnancy. No nausea, no bed rest or vomiting. No sub-chorionic hemorrhage this time (internal bleeding due to embryo implantation) and no cramping. And I was quite worried that morning sickness would strike while we were on our cruise (the stuff nightmares of made of). But thankfully, all was well (minus that one jolt of pain).

The only issue I've had, which sprung on me this past Friday unfortunately, is a UTI (sorry for the TMI). But ugh, holy crap, it's like having a UTI on steroids when you're pregnant. Your bladder gets inflamed, which sits underneath your enlarged uterus, and it feels like your belly is going to explode. I've been having a hard time sitting and walking (it's been more like waddling the last few days) because I've been so bloated... and sleeping has been essentially non-existent thanks to me having to get up to pee every five minutes. But I will endure whatever pain I have to to bring this little miracle baby to our world. In fact, I am just grateful for the pain because I am pregnant. And I wouldn't trade that for anything. A word about these photos

And I just wanted to say a little something about these photos. Ben took these images of me and it was so incredibly special to have my husband shoot my pregnancy announcement photos. I actually started crying while we were shooting. The whole thing just felt so special, so surreal. And in that moment my hormones took over and he just held me. It was honestly just amazing and so special to have him be a part of it all. I love you Ben, my baby daddy!

And to all my fellow IVF warriors out there

Have hope. Stay strong. Don't lose heart. Don't lose faith or courage. Because it WILL happen for you. You WILL be parents. IVF is a miracle. Science is a miracle. And although it's lonely, hard, painful and feels like it's kicking you while you're down, it's also a fighting chance. And you just have to keep your eye on the light at the end of the tunnel. It may feel like forever away, but you will get there. And I am 100% here for ALL of you along the way. Always. I will never forget the hardships and pain we endured to get here, nor will I ever take it for granted. And I know that you too will one day have your miracle baby and babies. Keep fighting the good fight. You've got this! I promise.

I've been holding a big secret you guys! HUGE! ASTRONOMICAL! And quite frankly I've been bursting at the seams to tell you for the last eighteen weeks (both figuratively and literally)! So I am so so so so sooooooo (AHH) hugely excited (and relieved) to finally shout from the rooftops that...

Maternity Photoshoot: Happy Due Date (and 4 weeks) to Soleil