Adjusting to my new life as a mom has been such a fun journey. It took us a long time to get here and I take each day with a smile and a heart full of gratitude. I feel like there is something exciting around every corner... she learns something new or I learn something new, and my days are infinitely better because of this incredible growth (literally today she pulled herself two whole feet across the room to her favorite toy).

Becoming a mother and caring for my baby girl has definitely been a learning process, seeing as how she is my first and I honestly have never cared for another human being in my whole life (no younger siblings, no younger cousins, never babysat growing up in Park City because all my neighbors were straight up vacant vacation homes). So I kind of had to dive right in and hit the ground running.

And I have learned A LOT. Oh my gosh. Each day brings something new. But one major thing I have learned is that things change quickly. She's literally growing right before my very eyes. She's only five months but there has been so many twists and turns already. Like one day I wake up and what worked yesterday doesn't work today, so I feel like I am always evolving and going with the flow, but I also try to be a little bit methodical with Luna's schedule for both her needs and my sanity.

And I know a lot of you have been asking for Luna's schedule and how we have done things from day one, so I wanted to share with you how we managed 0-3 months. Why We Needed a Schedule:

Now first, let me start by saying that I have never really been a super scheduled person. I have always been a bit more 'go with the flow' and like to live a little more spontaneously by running out the door last minute to this or that. But this whole 'raising another human thing' got me thrown off a bit and I desperately needed some guidance. Enter, the schedule.

Getting into a routine has helped me decipher Luna's needs. For instance, if she is crying, instead of going into panic-mode I can go through a mental checklist and figure out why a little better because I can compare it to yesterday and catch any abnormalities. So like, 'ok, it's 4:45 pm, she's crying, but I know she's not hungry, her diaper has been changed, her most recent nap was a little shorter than normal so she must need to take her last nap of the day a little earlier today.' This has made for a much happier baby and a more sane mommy. And we could all use that, am I right?!

But while I need help being able to decipher her needs and keep her happy, I also need a 'schedule' that is flexible enough to allow me to still be able to go out and run my errands, go to my mommy-and-me classes (because I LOVE THEM), or get my hair done a time or two when I start to look a little ratchet. I kind of like being a busy person, running from one appointment to the next, whether it's from meetings to lunch or happy hour with girlfriends to photoshoots to swim classes for Luna - we like to be on-the-go. Staying at home all day running a tight schedule just won't work for me.

So while I have a schedule, I know it's not the end of the world if things get altered. I treat the schedule more as a basic guideline and watch her for cues on what she needs. If one day we're out and about and she has trouble napping, I'll try and nap her at home the next day and see how we do. Or if she's not due to feed for an hour but is rooting, I'll feed her and adjust the schedule from there. And the same thing if she starts yawning, rubbing her eyes or burying her face into my chest. These are all cues that she needs a nap ASAP so I will get her swaddled and put her down and align the schedule thereafter.

The only thing I do not change is her feeding schedule. She eats, at the very least, every three hours during the day, sometimes more if she shows signs of hunger or is cluster feeding (which seemed to happen more towards the end of the day). So without further adieu, here is what Luna's schedule looked like from 0-3 months.

The first four weeks were more of a learning curve and adjustment period than anything else. We had just brought home this darling, tiny little baby girl home and I had never even changed a diaper in my life. Yes, you read that right haha! And don't get me started on this whole breastfeeding thing - that was a whole other ball game for me. Anyway, so our priority was honestly just soaking up our time with her, studying her beautiful face and just learning how to survive and maneuver (on very little sleep) in this whole new world we had just entered into.

So, I honestly didn't have a schedule whatsoever during this period because my only priority was making sure she was fed by nursing both on-demand and/or every three hours on the dot, round the clock. To track this, I used (and am still using) the Baby Feed Timer app. It allows me to log everything from the time she ate, which boob she ended/started on last, her diaper changes, when I pumped and what amount expressed and even her sleep.

During this stage, she usually stayed up with us until we were ready to head into the bedroom and go to sleep. She took naps on our chests, and basically lived in her rock n' play. And I always had to wake her up for feedings otherwise she probably would have slept all day haha. (Note: because she has to feed every three hours, it's important to wake her up to feed her so she can take in enough calories during the day to hopefully sleep a little longer at night).

We didn't leave the house much during this time period other than to see a lactation consultant (I saw Stephanie at Modern Milk if you happen to be local - she's amazing), to meet Luna's pediatrician and to practice leaving the house and using the stroller so that when Ben went back to work I could feel confident running my errands without him. But when we did leave, it was for short periods so I could get back home to feed her comfortably using my nursing pillow (I hadn't yet quite figured out how to nurse in public yet).

But once she hit week four, that's when we started working on developing healthy sleep habits (you can read about those here) and began to introduce a more structured schedule. I didn't want to start before that because I needed to figure out this #momlife as well as get my milk supply going first (and for that, a schedule is not really recommended so your boobs can adjust to what your baby really needs). Once my milk supply had come in strong, we figured out this whole beast of breastfeeding, and Luna was ready, we started implementing a bit more of a flexible routine in order to give our days some predictability and turn her days into days, and nights into nights. We were also ready to start allowing her to sleep longer stretches rather than waking her every three hours in the night to eat.

We were never really strict with the schedule because, well, she's a baby, not a clock, but generally speaking we aimed for the schedule below on the left. However, we most always ended up with a schedule that looks more like the one on the right: 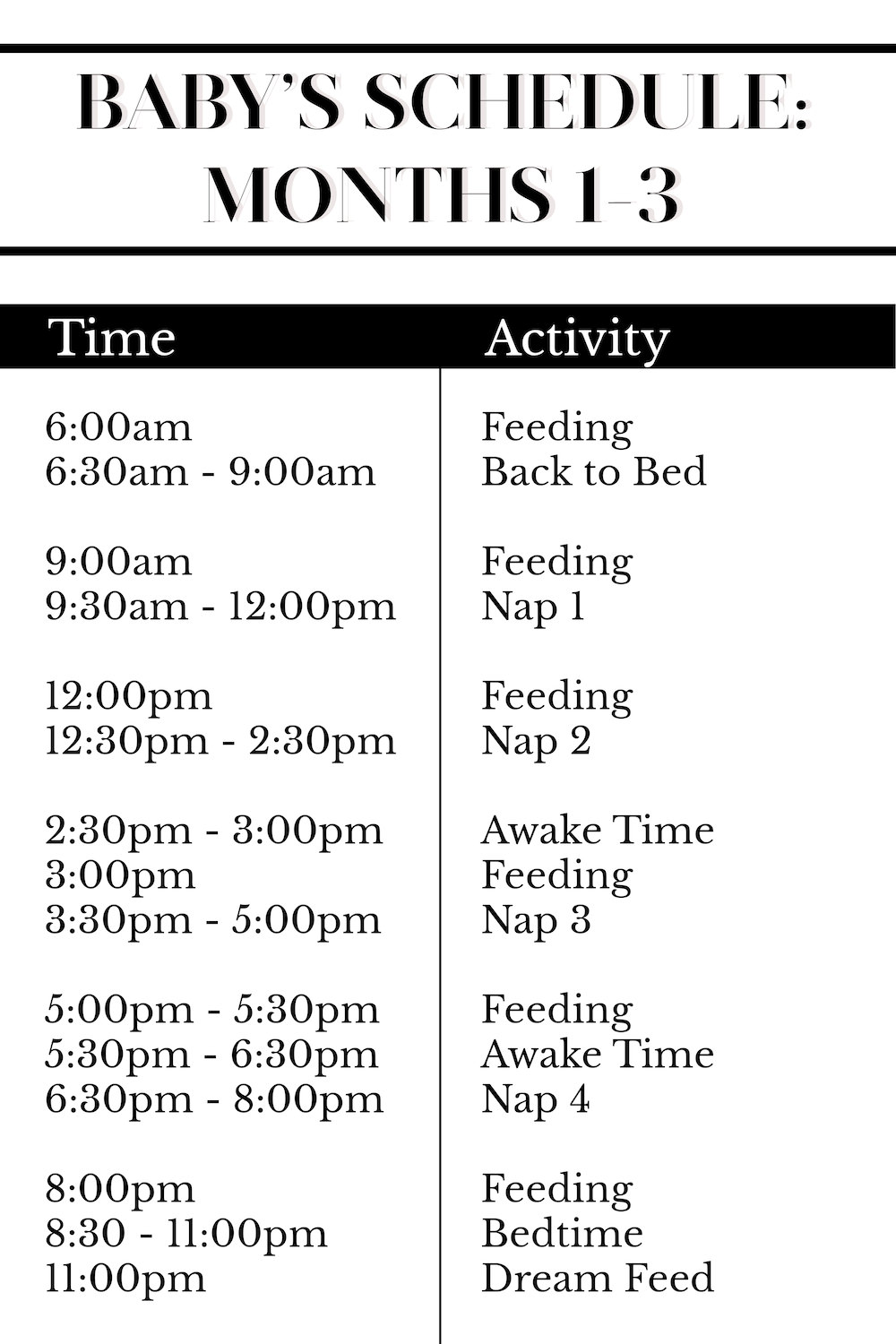 Let's talk about the schedule on the left:

First things first, I chose an 8am start to the day because anything earlier at this point was just too dang early. After being up all night, waking every three hours to feed her, mama needed as many zzz's as she could clock before getting up. Because, let's be real, there's no time for naps when you're a mom. When Luna napped, that was the only time I had to eat breakfast, do some laundry, take a shower, make myself lunch, get some work done, take a phone call or heck, even brush my teeth on some days.

We chose to implement the E.A.S.Y method: eat, awake time, sleep (and simultaneous 'you' time). The thought behind this method is that it teaches your baby how to put themselves to sleep, rather than always nursing them to sleep. But clearly, as you can see from the schedule on the right, that didn't always happen. In fact, it was very rare in the beginning. Luna was tired. She most always passed out immediately following a feeding and was down and out until it was time to wake and feed her again, especially during those first few feedings of the day.

As the day wore on, she'd get a little more energetic, so we would attempt tummy-time in her activity gym, but for the most part, she hated it and wouldn't last more than a few minutes. But it was definitely something we strived for, if we could make it happen.

However, I will note that as Luna has gotten older, we try to strive for a bedtime between 7-8pm as I find that to be the 'sweet spot.' If I wait too long, she has a harder time going down. So my advice would be to shoot for somewhere between that time. Now let's talk about the schedule on the right:

As you can see, Luna would usually wake up at 6am when Ben had to leave for work. I would usually nurse her back to sleep (a no-no, I know), just to get a little extra shut-eye if I could. I'd usually get up for the day around 9am but she was usually back down shortly thereafter. In the earlier weeks, it wasn't until the afternoons where she would perk up a bit.

The fact that she slept so much really allowed me to run my errands and bring her everywhere because she had no trouble passing right out in the car seat or in her ergobaby carrier. It wasn't until about four months old that she started to get 'too alert,' (and that's not a bad thing at all), to nap from anywhere. These days, she wants to be a part of the party and conversation so if I want a decent nap out of her, it has to be in her crib for the most part. See, like I said, things change day by day.

When we were home, she would either nap in her snoo (in the bedroom), mamaroo (in the kitchen) rock n' play (in the living room) or dock-a-tot (on the bed or in the bathroom while I got ready). It just depended on where I was hanging out.

During the 'awake time,' we would always either do tummy time, I'd wear her around the house with my Solly Baby Wrap or we'd take a shower or do bath time or sing and play.

So you guys will have to stay tuned for her updated schedule, which I will be sharing shortly. I just wanted to get this out there first. Do you guys have any questions? I am always happy to answer. Leave them in the comments below! Cozy at Home for the Holidays