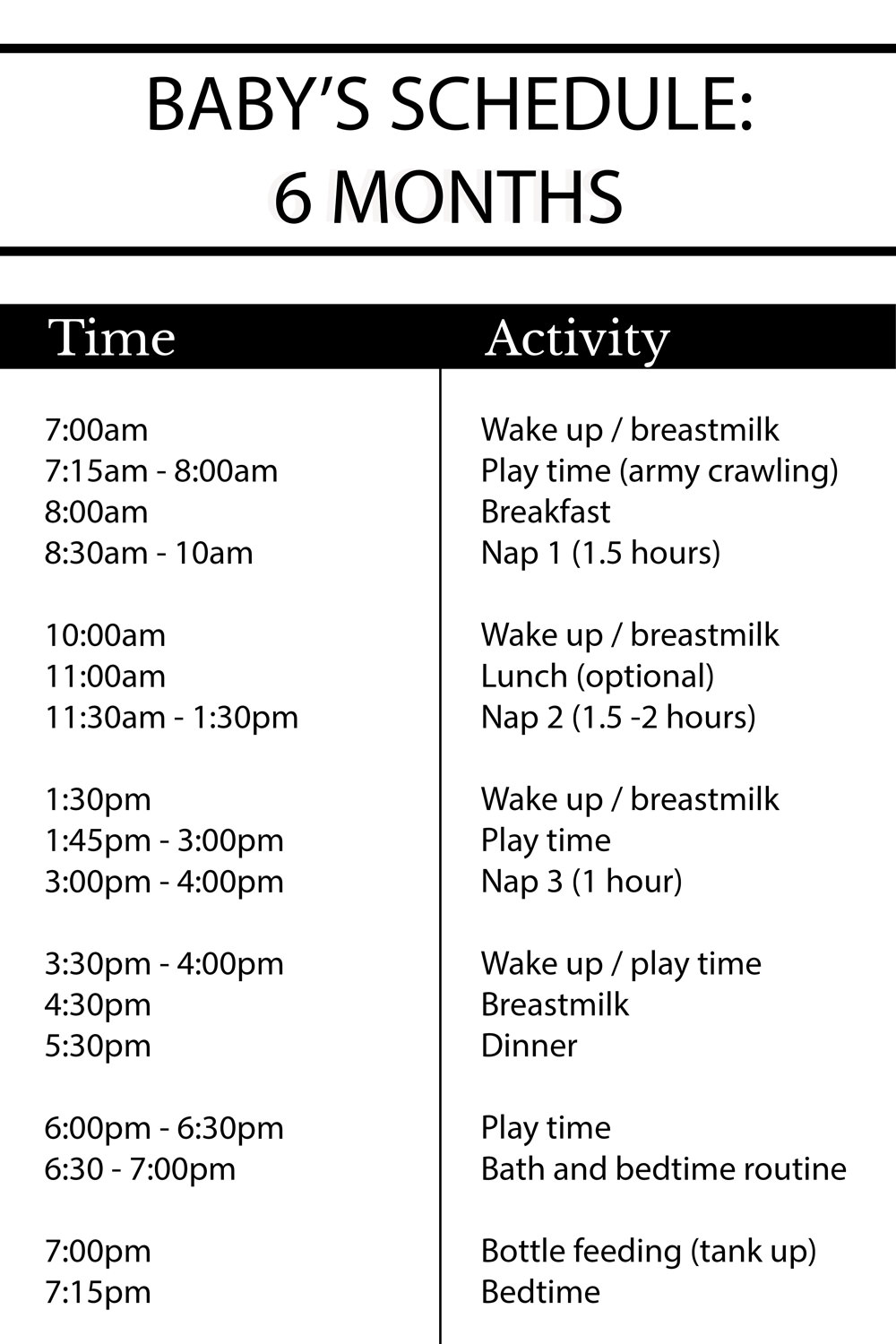 Hey guys, so I have had a few requests for Luna's schedule at six months so I wanted to quickly share. You may recall reading her schedule at 4-5 months here and her 0-3 month schedule here. As you will see, there are quite a few changes from her 4-5 month schedule, namely as we started introducing solids and dropped her fourth nap of the day (as well as the dream feed). But here's a little run down of her typical day at six months old:

As I am sure you guys saw from my Instagram stories and this blog post all about Baby-Led Weaning, we started introducing solids to Luna at six months of age. Note that it wasn't like, 'oh you're six months, time to eat solids.' We knew she was ready for solids when we saw two things: 1) when she could sit up on her own and hold her head up steadily (so that food wouldn't get trapped in her esophagus), and 2) she was showing an interest in solids (grabbing at our food, watching us eat, mimicking us chewing are all signs she showed).

My pediatrician recommended that we start with one to two meals a day and work up from there. She said that by nine months, Luna should be eating three solid meals a day, each containing some form of iron as well as water (and can have snacks thrown in there too if she wants).

At first, I honestly started with just one meal a day, breakfast, because it was the easiest for me. We usually just gave Luna iron-fortified oatmeal with a little brown sugar for breakfast with some fruit and she LOVED it (even the oatmeal at Starbucks with brown sugar is great if you're on the go). Every now and then I would throw in a snack of a teething wafer (these and these are both Luna's favorites) or if my lunch or dinner came with sticky rice (like if we went to sushi) fruit or fries I'd let her have at it (mom of the year award here... but pretty sure her favorite food is fries haha).

Six months is also the perfect time to let your baby experiment with food, flavors and textures by introducing all of the necessary allergens (we learned about this in the Feeding Littles course). Unfortunately, this is also the time that we discovered Luna had a pretty severe egg allergy, which is another reason why I chose to take things a little slower in the amount of solid meals I was giving her a day, simply because it's HARD to find stuff that doesn't have egg in it. This means, she can't just usually eat off my plate. I have to be prepared and give her her own separate meals typically. So bi-monthly Trader Joe's hauls were helpful. Once we had her full-panel allergy testing done and learned she was only allergic to eggs with sensitivity to dairy, I felt more comfortable continuing to give her the remainder of the allergens (peanut butter, shell fish, tree nuts, fish, wheat, soy, sesame, etc.).

Anyway, if you're curious about learning more about Baby-Led Weaning (where babies feed themselves and you're not having to buy a bunch of baby food or make purees, then check out this post here (and use code CAITLIN2018 for a discount on the Feeding Littles course). At six months, our rule of thumb was still the same as her 4-5 month schedule, which was that if she had been awake for 1.5 hours (or was showing signs of being tired (rubbing eyes), then it was time for a nap.

The only difference from her previous schedule was that we dropped her fourth nap of the day, taking it down to three, and I noticed that her third nap of the day was starting to become a struggle.

That's when we would try to implement the 'oops nap.'  The 'oops nap' is basically a nap we get on the go. If she is struggling to take a nap in the afternoon, I will save my errands for later in the day. Then, if she happened to fall asleep in the car while we were out and about, perfect!

As you guys know, Luna is exclusively breastfed and my goal is to nurse for a year. But one thing I realized she no longer really needed was the dream feed (you can read more about that here). Basically, she no longer needed me to sneak into her room around 11pm and give her an extra feeding because she was so good at sleeping through the night (she usually sleeps 7:15pm - 7:15am). I honestly probably could have cut out the dream feed sooner but I was nervous that she relied on it to sleep through the night (basically I was scared of jinxing her awesome sleep habits). But once I cut it out, she didn't even notice.

One thing that did notice though was my boobs. So instead of nursing around 11pm before we went to bed, I had to instead start pumping (which isn't my favorite). But this definitely helped relieve my boobs so I could sleep through the night without leaking. Over time, my boobs adjusted and felt less full, thank goodness. At nine months, I am still doing this nighttime pumping but could probably drop it soon if I wanted. I just want to keep my supply up a bit longer before I start weaning her.

So since I nurse her at 4:30pm, then she has dinner (solids) and then her bottle at 7pm, I would either pump while Ben gave her her bottle (approx. 7oz), or I would throw her on the boob for a few minutes before Ben would take her and give her her bedtime bottle. It just depends on how I was feeling.

Luna's bedtime is still 7:15pm. It's kind of her sweet spot. So between her last nap of the day and bedtime we would do a lot of army crawling around to get her 'willies' out and get her nice and tired for when bedtime rolled around. After we'd get home from errands or she woke from her last night, we would basically just go into our bedroom, turn on some music and have a solid two hour play sesh.