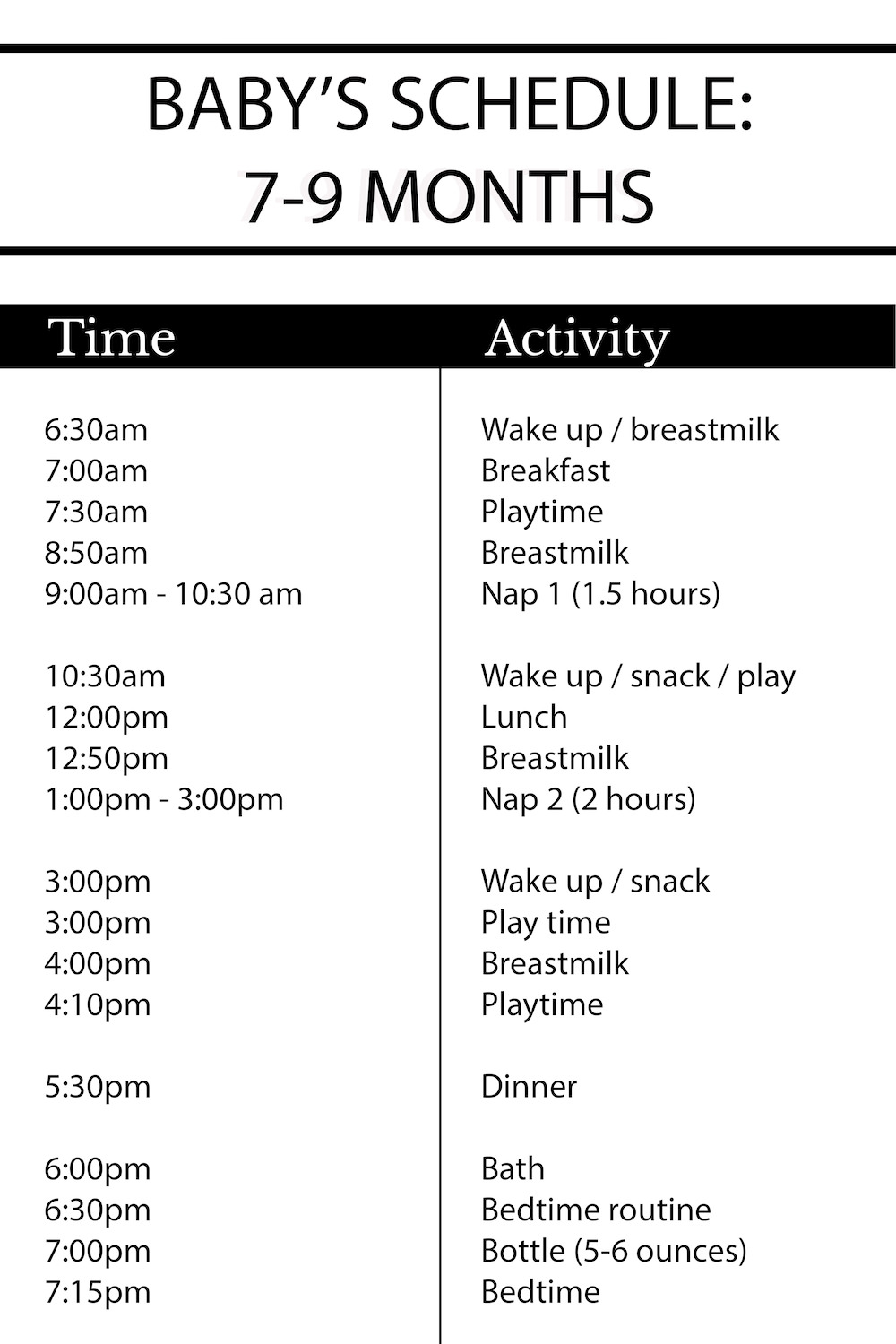 The main difference from six months to 7-9 months is we dropped nap 3 from her schedule and stretched out her awake times slightly. Her solid meals also became more of a focal point in our day after introducing solids at six months.

That's just kind of a general overview, but take a look at the schedule below and I'll go more in depth a bit. First, her wake time has slightly adjusted at 7-9 months. On average she wakes anytime between 6:30am and 6:45am. That's just over eleven hours or more from bedtime so I will take it haha. Obviously a solid twelve hours would be a dream, but most babies sleep cycles are eleven hours so if you aren't getting a solid twelve either, don't fret. Eleven hours is realistic and developmentally appropriate, according to Cara of Taking Cara Babies.

But it also works in our favor because we like to go get coffee as a family in the mornings before Ben heads off to work... and this allows us to do that.

Regarding Luna's feedings, I was still nursing her every 2-3 hours at this point, starting with when she woke up for the day and before each nap. I didn't include it on there, but sometimes I would also give her boob about 30 minutes before Ben would take her into her nursery for her bottle and bedtime. This was more just to relieve my full boobs and to give her that extra little tank. (Note that this was the first nursing session to go when it came time to start weaning her at 11 months).

At seven months we got more serious about feeding Luna three solid meals a day. We had a more slow start to solids due to the discovery of her egg allergy and I wanted to take it more slow and be ultra cautious in case there were other allergies... but we also went to Spain and Morocco so I was nervous to have her eat a ton of solids there since she hadn't yet received her hep A shot.

Anyway, they say that six months is really for introducing solids and experimenting with food, flavors and textures, but by 8-9 months your baby should be eating three solid meals a day. So we got more serious about solids at seven months as soon as we were back from our trip.

If you want to learn more about how we feed Luna solids, you can check out my post with Megan of Feeding Littles for more information on Baby-Led Weaning.

One thing I did notice though as we continued to feed her solids is that her appetite grew for them. So when she woke from her naps I usually offered a snack of some sort (fruit or veggies usually (cooked carrots were her fave)).

Like I mentioned above, the biggest difference between Luna's schedule at 6 months is that we dropped nap 3.

Her third nap of the day just kept getting shorter and shorter, and she kept fighting it more and more. She was having a hard time not only falling asleep, but staying asleep consistently.

I had been trying to implement the 'oops nap' which basically was me trying to get her to "accidentally" fall asleep for her third nap of the day by strategically running errands at that time. But as she kept fighting it I realized it was time to take her down to two naps a day.

For her 7-9 month schedule I really focused on the following:

This was my main method for her schedule every day and I adjusted the day's schedule as needed based on these times. So if she woke up at 7am one day, then her first nap wasn't until 9:30am. But obviously if she seemed more tired than normal one day then I'd have to adjust for that too. I just kind of watch her cues and go from there.

And obviously life happens. If we were out and about when the clock struck nap time, then we did our best to let her nap in the car or I'd try to keep her awake if we were close to home so I could get her home and in her crib. You just kind of go with the flow and do what you can. At this point, Luna was crawling (she started crawling at the end of six months) and even standing on her own so playtime was starting to get a lot more fun (and exhausting... for both of us haha). But it was awesome to see her play so hard (just wait till they start walking... yikes haha).

One of her favorite things to do was push her ball around. We got her this little blow up ball and she loved pushing it with her hands and then chasing after it haha. So cute. She also loved crawling around with one toy in each hand (usually her maracas or her fishing pole.

She also started walking with her walker around 8.5 months and she was cruising all over the house. She loved piling her toys in the cart and pushing them around.

She also learned stairs (yikes) so we would practice how to safely go up and down during playtime a lot.

Anyway, not really schedule related, but I thought you guys might be interested to learn more about our playtime.

Luna LOVES bath time! Holy cow. It's so cute. But while we were visiting my parents in Utah for the summer they didn't have a bath so we would take showers together and she loved just playing on the floor with all her toys haha. She likes story time, but half the time she's more interested in throwing the books than reading them haha. But of all her books, this one is BY FAR her favorite! She get's really excited to read it haha.

When were at home in Arizona Ben is usually in charge of giving her her bottle before bed (5-6 ounces is her usual intake), but because we were in Utah while he was in Arizona much of the summer, I took over bottle duties. It's so nice to have that extra snuggle time but I hate to take it away from Ben when we're all together. It's their special extra Daddy-daughter time.

Anyway, hopefully this schedule was helpful. Let me know if you guys have any other questions! Thank you to Taylor Cole for these beautiful photos

Cozy at Home for the Holidays